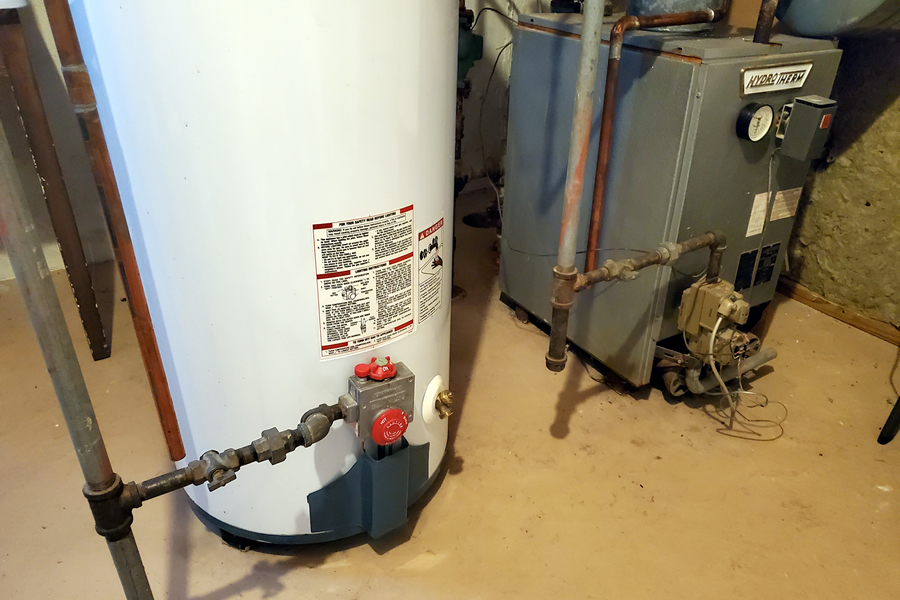 How Do Gas Water Heaters Operate?

Tank-type water heaters boil cold water and store it until it’s required by various plumbing appliances and fixtures in a home. Gas water heaters use convection to ensure a steady supply of hot water. In this case, cold water enters the storage tank through the house’s main cold-water supply, ensuring the tank gets a steady supply of cold water. As cold water is denser than heated water, it settles at the bottom of the tank where it’s heated by a gas-powered burner that’s located under the sealed tank. As it gets warmer, the water rises to the top of the storage tank, where it’s drawn out of the tank by a discharge pipe to supply hot water where it’s needed. It’s worth noting that the discharge pipe is a bit shorter than the system’s dip tube as its main purpose is to direct hot water out of the tank.

The heater’s gas-powered burner is controlled by something known as a gas regulator that’s mounted on the heater’s side. It’s worth noting that the assembly also houses a thermostat, whose main purpose is to measure how hot or cold water inside the storage tank is – when certain thresholds are met, it turns the burner either on or off as needed to ensure the water stays at a specified temperature.

The system also has an exhaust flue that runs through the tank's center. The flue’s main purpose is to channel exhaust gases through the system and out of the building via a vent pipe or chimney. It’s worth noting that the hollow tube’s fitted with a spiraling metal baffle that’s designed to capture heat and convey it to the water surrounding it to maximize the heater’s efficiency.

A close look at how each component works demonstrates the simple yet clever operation of the conventional tank-type gas-heated water heater.

A water heater’s tank consists of an outer steel jacket encompassing a water storage tank that’s been pressure-tested. The tank’s inner part is made of high-quality steel covered by a plastic layer or vitreous glass that’s glued to the tank’s inside to keep it from rusting. Passing through the tank’s center is a hollow exhaust flue whose main purpose is to direct exhaust gases from the gas burner out of the system to an exhaust vent or chimney. Most gas water heaters have a spiral metal baffle that runs through the flue to capture the heat from the gases being exhausted and conducts it to the water in the tank.

Between the outer tank jacket and the inner storage tank is a layer of insulation whose main purpose is to reduce the amount of heat lost. The tank’s insulation can also be supplemented by adding something known as a fiberglass insulation tank jacket on the heater’s outside. Fortunately, the insulation is easy to install and inexpensive. When installing the extra layer of insulation, ensure it doesn’t block the flue hat found at the top of your tank or the burner’s access panel.

Apart from the long pipe that supplies the tank with cold water and the shorter discharge pipe that directs hot water to different plumbing systems in a home, there are several other key components found inside a gas-heated water heater’s tank.

In glass-lined heater tanks, you’ll find an aluminum or magnesium metal rod inside the tank known as a sacrificial anode. The rod is fastened and bolted to the tank’s top and extends into the water tank. The main purpose of the anode rod is to draw out rust-causing ions from the water, thus helping protect the tank from corrosion. Heaters that don’t have a separate anode rod typically have magnesium or aluminum-coated hot water outlet pipes – these pipes serve as anode rods. If you notice that the water flowing from your faucets is discolored or smelly, that could be an indication that your heater’s anode rod has been used up and needs to be replaced. Fortunately, replacing one is a fairly easy task that you can do as a DIY.

There are two pipes fitted at the top of the heater’s water tank – a hot water discharge pipe and a cold-water supply pipe.

How water discharge pipe: The discharge pipe is the tank-type water heater’s business end as it’s the pipe that’s responsible for supplying hot water to all appliances, showers, tubs, and sinks that need hot water. The pipe can also have a shutoff valve; identified by a red handle in most cases.

The propane or natural gas that’s used to heat the water is generally supplied by a copper or steel black gas line that has its shutoff valve. Make sure you know where your shutoff is located for easy shut-off during repairs or emergencies. The line supplying gas feeds into the regulator, which generally houses the water heater’s thermostat. The same valve is responsible for supplying gas to the pilot light via a small secondary tube. The pilot light, on the other hand, is responsible for igniting the burner when the thermostat and regulator valve calls for it.

From the regulator, propane flows to the burner assembly, which can be accessed through a metal panel located at the bottom of the heater’s outer casing. It’s this assembly that houses the gas burner and pilot light. The heater’s burner and pilot light adjustments play a vital role in how the system operates – they help ensure the system functions properly and stays energy-efficient.

The flames produced should be about half an inch in height and should always burn blue. Yellow flames are a sign of improper air mixture or dirty burner jets. It’s worth noting that the heater’s pilot light includes a vital module known as a thermocouple, which is a tiny valve that’s responsible for converting heat to electrical impulses. Thermocouples in modern water heaters are known as flame sensors and are a vital safety feature. Their main purpose is to sense the pilot flame and keep propane from reaching the burner if there isn’t a pilot flame to light it. Replacing a flame sensor or thermocouple isn’t that hard; though, you are still advised to have a professional do it for you if you aren’t that comfortable doing it.

Exhaust flues are hollow cylinders that run through the water tank’s center and serve two purposes. The first is to exhaust combustion gases released by the gas burner, and the second is as a heat exchanger that helps heat cold water inside the tank. Flues need to be properly exhausted, and their construction must adhere to specific code requirements.

Another safety feature found on water heaters is the pressure-relief and temperature discharge pipe and valve. The feature serves the same purpose as the radiator cap found in cars, and that’s to relieve excessive pressure or temperature build-up inside the water tank. The valve is generally located on the tank’s top and is generally directly threaded into the tank itself. To see if the valve is working properly, slightly lift the handle and see if water from the tank flows through the overflow pipe. If nothing happens, then it’s time you considered replacing your temperature and pressure-relief valve.

Hot water tanks will, over time, build up sediments at the bottom of the tank, leading to several issues. Water heaters that are full of sediments won’t heat efficiently and may start making gurgling, bubbling sounds. These sounds are often caused by boiling moisture-saturated sediments. Periodically draining your tank via the drain valve and removing sediments can help avoid problems. Flushing a water heater tank is not that hard and is something you can do by yourself. All you need to do is:

Turn the gas pilot control valve to “pilot.”
Shut off your water heater’s cold-water supply.
Open a hot water faucet.
Attach a hose to your tank’s drain valve and put the other end in a utility sink or floor drain.
Open the tank’s drain valve and let all the water inside the tank drain out. Chances are the water will be discolored as sediments flush out. If the tank’s too dirty, you might have to refill your tank and drain it a second time to remove all remaining sediment.
Once you are done emptying the tank, shut the drain valve and refill the tank by opening the cold-water supply valve. Turn the propane control valve on and ensure your gas burner ignites. 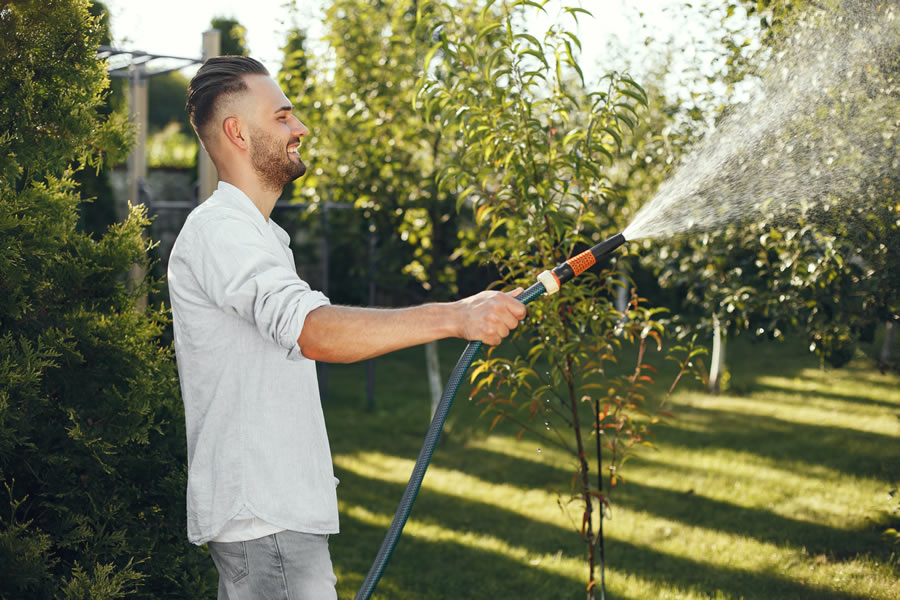 Some Summer Water Saving Tips To Help Beat The Heat 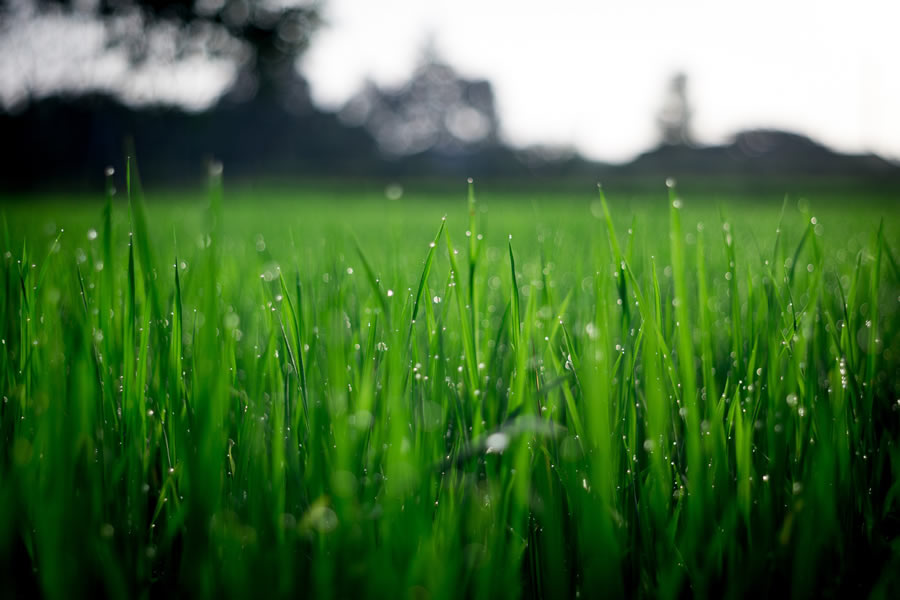 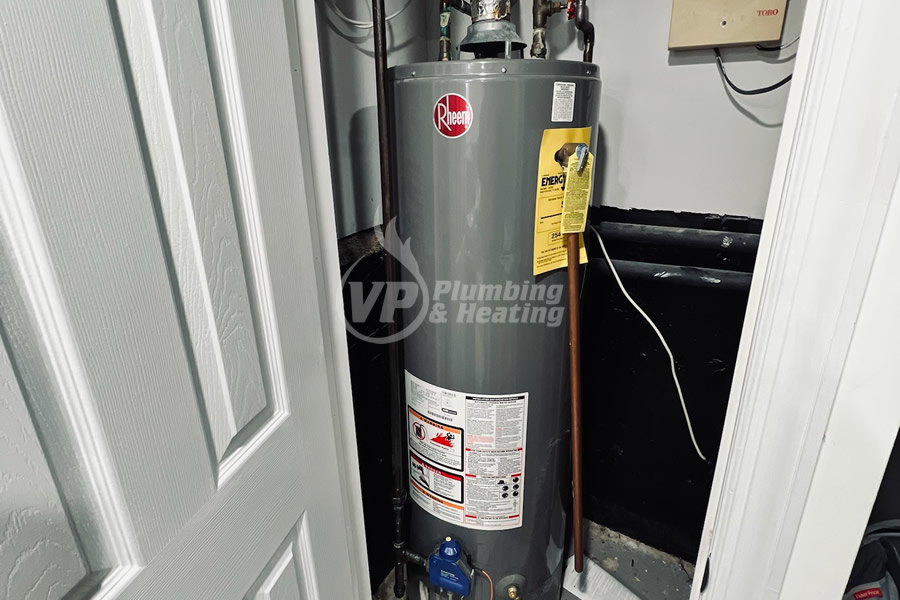 2 Signs It Might Be Time To Replace Your Water Heater